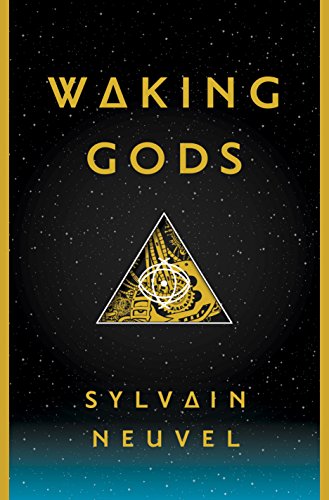 Okay ! I am absolutely in love with this series.

The story pretty much starts from where it was left at sleeping Giants. Personally I felt the first book was written to prep the stage for the second. I hear there is one more book in the series and I am very curious to know what that will bring up.

There may be minor spoilers ahead if you haven’t read the first book.

The giant robot Dr.Rose Franklin and her team discovered in the sleeping Giants is now called ” Themis ” and is part of the United Nations’s new organization ” Earth Defense Corps ( EDC)”.

EDC is created to protect the planet Earth from alien invasions. 10 years after the EDC is created, giant robots starts to appear in major cities all over the world. Before the EDC could formulate a plan, they start releasing a poisonous gas that end up Killing millions of people. It’s upto Themis and Dr.Franklin’s team to protect the Earth with pressure and death tolls increasing.

Like it’s predecessor, Waking Gods is narrated through mission transcripts, interviews and journal entries. This book answers most of the questions that were built up in the first book.You get to know more about the characters and you’re gonna absolutely fall in love with them all. Especially Kara and our unnamed interviewer. And I definitely have to mention about the humor in the book. Sylvain Neuvel has an amazing talent of introducing humor in even the darkest part of the book and makes you feel bad for laughing.

I listened to the audio book version and it definitely suited the epistolary format. It was narrated by full cast and it helped in framing each character individually. I definitely recommend picking up the audio book for Themis files 1 & 2.

PS : Eva’s voice was pretty annoying in part 2 but I think we could ignore that 😉

I just got the ARC for book 3 and will be sharing a review with you soon :).

Verdict : Themis files is a great series. Should you read/listen to it ?
YES