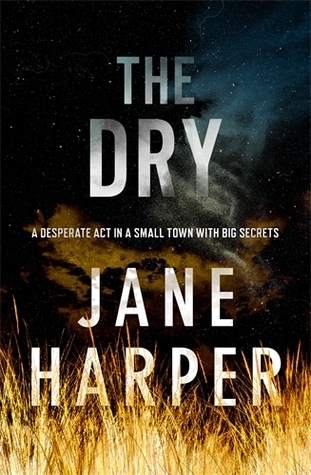 Set in Kiewarra, Australia ” The Dry” by Jane Harper presents triple murder and small town Dynamics in the right proportion.

Aaron Falk returns to his hometown 20 years later to attend his friends funeral. His friend, Luke Hadler allegedly killed himself after killing his wife and his six year old son leaving only baby Charlotte alive.

As soon as Aaron enters his hometown, he realizes he is not welcome here. 20 years ago, Aaron was a suspect in the murder of a teenager Ellie Deacon and he was let go as Luke gave him an Alibi. Falk and his father fled under a cloud of suspicion, saved from prosecution only because of Luke’s steadfast claim that the boys had been together at the time of the crime. But now more than one person knows they didn’t tell the truth back then, and Luke is dead.

Amid the worst drought in a century, Falk and the local detective question what really happened to Luke. Falk faces lots of resistance from the town as the mystery of what happened resurfaces slowly. With the narration alternating between the murder investigation and Falk’s past,Jane Harper weaves a complicated murder mystery filled with amazing characters.

The town Kiewarra where is my favorite part about the book.
Right from the bartender to the policeman’s wife Rita everyone felt so real and unique. People who live in cities imagine small towns as a serene place to live. In reality, it is the complete opposite. That too, When something like a triple murder happens in the town, it disrupts the whole harmony. There are rumors , tension and everything is everybody’s business.The author did a great job in bringing the town and the characters to life. As I was born in a small town myself , I could totally relate to it.

But the actual mystery ? Thumbs down. I didn’t find it compelling and the narration was too slow. When main character is involved personally with the case, it makes me impatient. I would like the plot to be moving fast with lot of leads and twists. This book totally lacked it and the interludes about Falk’s past didn’t help with the pace of the book either. But overall it didn’t feel like a bad read. The writing & the characters were so good that it makes you overlook the mystery part.

As far as the main character Aaron Falk is concerned, he is good but not great. When you create a character for a series, the unique traits of a character is important. I think that differentiates a stand alone novel and a series. I personally felt Aaron Falk lacked those traits. He could be your next door Tom, Dick or Harry. Nothing special. I’m hoping to see more of him in the author’s next book.

With this book, I differ from the popular opinion. I enjoyed reading the book, I liked the characters, I liked certain parts from the book but the mystery part of it was mediocre.