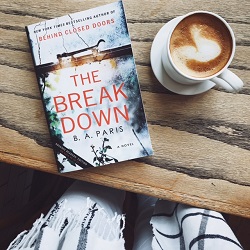 Book Review : The Breakdown by B.A.Paris

This one is hard to review. I haven’t read the author’s debut ” Behind Closed Doors” . After reading this, will I go go back and read her first book ? maybe..

Here is the plot:

Cass Anderson drives home from a party on a stormy night. On the way back she takes the shortcut despite her husband Matthew’s insistence that the path through the woods, with no mobile signal, would be too dangerous in the storm. She almost reaches home when she sees a car pulled over on the side of the road. She sees a woman inside a car but due to the rains she couldn’t see her well. Cass pulls over and waits for the woman to giver her a sign that she needs help. As minutes tick with no signal from the woman, Cass gets paranoid and she drives home. The next day Cass wakes up the news of young woman brutally murdered in the woods. Even worse, she realizes its her newly acquainted friend Jane. This shakes her up and not wanting to admit to Matthew that she took the shortcut he warned her against,she suffers with guilt in secret. Along with that, Cass is starting to have issues with her memory. At first, she starts misplacing things, forgets plans with her friends. But forgetting that she agreed to have an alarm installed? How could that be?. She begins to wonder if she is going to turn up like her mother who suffered from dementia. As she is going through her guilt and memory loss, the phone calls start arriving. Someone is calling every day over and over. But they NEVER say a word. Everyone tells her it’s just a call center making cold calls. But Cass starts to worry that it is from Jane’s murderer. She’s preoccupied, forgetful, paranoid, and she begins to suspect she was seen by the killer that night, and is his next target. Could he have seen her?

The thing about psychological thrillers are they place you inside the character’s head and make you go through their fears, insecurities and so on. In this aspect, B.A.Paris fails to succeed completely. It starts well but at times you begin to feel that Cass’s fears are baseless and for a teacher she is really dumb. For the most part, nothing happens in the book and the predictability of the plot doesn’t help either. I don’t want to get into details here as I may spoil it for someone. By the time you start to get tired of Cass’s constant overthinking, the story picks up and it ends with a rather satisfying climax.

To me, this book was an ok read. I found it hard to be inside the head of an annoying main character. I couldn’t push it off as a bad book either since I liked how the book ended.