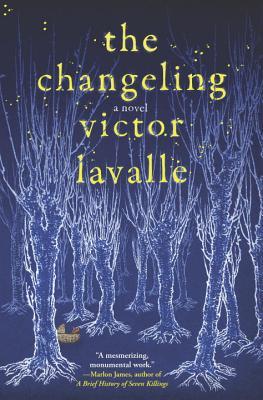 The Changeling by Victor LaValle

The Changeling is a fairy tale for adults. It talks about our fears, insecurities, obsession with phones and computers, racism along with witches and trolls.

“A bad fairy tale has some simple goddamn moral. A great fairy tale tells the truth.”

Changeling is one such fairy tale.

Apollo Kagwa’s father abandoned his family when he was young and he was raised alone by his mother Lilian. Apollo grows up as a self-contained kid with a love for reading. Eventually he becomes a book seller and owns a business named ” Improbabilia”. When his wife, Emma gets pregnant, Apollo decides he should be there for every second in his son’s life. He is a modern-day father. He takes out his son to the park, feeds him, helps out at home, takes 100’s of pictures of his son and posts them on his Facebook. One day when he is working along with his friend Patrice, he finds the first edition of ” To kill a mockingbird” from a basement. Apollo is thrilled because this may mean so much to the future of their family. Everything seems to be going well until Emma starts to act out. She begins to feels very uninterested and disconnected from their son Bryan. Initially Apollo waves it off as postpartum depression and when it gets too far he yells at her saying she is the problem with the family. Next day he wakes up chained in his kitchen and right before him, Emma commits a horrific act and vanishes into thin air.

This is where the genre of the book changes. Three months after the incident, devastated Apollo finds from a mysterious stranger that his wife is alive on an Island near New York city. Apollo then begins his journey into the long-forgotten island determined to find and kill his wife. The rest is a dizzying tale that weaves myths, fairy tales, fantasy and real lives together.

Victor Lavalle takes his time in building up the story. For some people, the pace of the story might may seem very slow (he explains every scene in gruesome details. E.g.: When Apollo cuts a friggin cabbage) but I recommend you to read further. It all comes together in the end. Personally, I enjoyed the pace of the book. A lot of books these days rush through the narration and you remember the overall plot but not the moments.

With this book, I remember so many moments:

and so much more.

I was able to feel everything Apollo throughout the book and that’s where Victor Lavalle succeeds.

The changeling is not a perfect book. There are some parts in the book where I felt it was incomplete/unexplained (The island part! whoa, what the Hell happened there?). But it makes you think. For new parents, it would definitely make you wonder, ” How do we protect our children?”